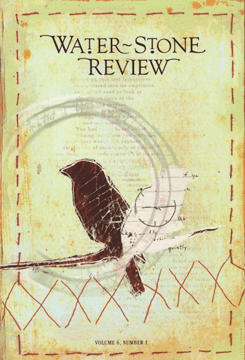 Weaving in and out and forming a solid backbone to the work published in this new issue of Water~Stone Review is the idea of legacy.  The legacy of a nation that shows care or lack of care for its own citizens, for the earth, for peoples

elsewhere in the world.  The legacy of individuals and families, who pass on from one generation to the next behaviors, values, and ways of living.

What is the responsibility of the literary artist in the 21st century?  For Carol Bly, author of this year’s Meridel Le Sueur Essay, “New Tooling for an Old Job – Trying to Save America,” it is to refuse “to make one’s peace” with cruelty.  She takes up the challenge posed by Meridel Le Sueur to do work that responds to the deeper issues of cruelty in the world, in any medium that suits.  For Elizabeth Alexander, it is to “live in the word” – which is precious and precise and one of the only ways we have to reach across to each other.

Carol Bly’s focus on cruelty echoes in a wonderfully prescient way the preoccupations of many of the writers in this issue.  The prose writers focus more heavily on individuals and families – a father’s cruelty to his young, motherless son in “Fresh Killed,” the legacy of abuse passed on from one generation to the next in “My Sister Charlie.”  Many of the poets address their voices to the larger world.  Philip Dacey’s “American Teamwork” forges links between many of our popular pasttimes and institutions: sports, politics, art, music, finance.  Maxine Kumin writes an elegy for the century she was born in.

Where is the light in these visions?  There’s lots of it, actually.  In the kindness shown by two brothers to each other and to the most vulnerable member of their family in “Something Dead for Benny.”  In the gesture an old man makes to a boy through a window in Mick Cochrane’s “Sunday Service.”  In a woman’s fight to educate herself and others on how to reclaim a blocked ocean creek that was once a corridor for migrating salmon in “Bridge Over Nothing.”  A boy’s interest, in Leilani Hall’s “For Josh Who Thought He Would Not Turn Seven,” in the story of the brave little tailor and the power of needle and thread to mend those things (“this hand, this heart”) that have been torn or broken.  The woman, in “The Interview,” whose autism helps her to think like animals and understand what and how they feel.

The three winners of this year’s Jane Kenyon Poetry Prize, judged by Naomi Shihab Nye, are “A Random Gust from the North” by Connie Wanek, “For Josh” by Leilani Hall, and “First Party” by Deanna Kern Ludwin.  We are happy to also publish two poems selected for Honorable Mention: “The Interview” by Danusha Lameris de Garza and “Farmhouse” by Kathleen Weihe.

Our two writers’ interviews are with Elizabeth Alexander, author of three books of poetry and numerous essays, with a new book of poetry and one of essays forthcoming from Graywolf Press, and Jewell Parker Rhodes, author of  three novels, including her most recent, Douglass Women, winner of the 2003 Literary Award from the Black Caucus of the American Library Association, and two books on writing.  Elizabeth Alexander and Jewell Parker Rhodes were visiting writers to Hamline’s Graduate Liberal Studies (now The Creative Writing Programs at Hamline University) program this past year.

“One feels the depth of the lake,/the weight of an iron anchor/falling through the fathoms.”  So says the speaker in Connie Wanek’s poem, “A Random Gust From the North.”  These lines capture for me the potential of literature – it’s endless depth and weight – its capacity to teach, to provoke, to comfort, to mend.