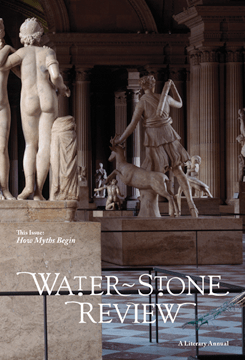 Each year, when I write this opening essay, I end up writing variations on the same theme: the human condition in all its terror and beauty.  Simply put, the human condition is what it is, and writers grapple with it over and over—sometimes making sense of it, sometimes not—and the work we publish captures and depicts our ongoing, mythic human journey.   If that sounds like a cop-out, it’s not meant to be.  Because each issue is different; each is beautiful and haunting and transformative in its own way.  But the raw material we’re all working with as writers, that our authors have shaped into these winning poems and stories and works of creative nonfiction, is made of the unchanging stuff that joins us one to another—sentient and non-sentient, human and nonhuman beings.

Inspired by Philip S. Bryant’s poem, we chose How Myths Begin as the title for this year’s issue.  Numerous abstract words come to mind when you think of myth, words like epistemological, archetypal, metaphysical, and allegorical.  And let’s not forget sacred.  For our purposes, I’ll simply say that as we reviewed the contents for our next issue, we marked the many ways in which our authors seek, in Ed Bok Lee’s words, “something to believe in, bigger then themselves.”

These writers are embracing, revising, and exploding old myths and creating new ones.  The narrator in “Veteran’s Day” by Sarah Gilbert, winner of the 2011 Judith Kitchen Creative Nonfiction Prize, chooses familiar heroes from Greek myth as models: “But for the shredding of flesh, the man-killing, I could be Achilles on any given day.”  Home is her crucible: “Sarah, constant, changeable, keeper of passions, bearer of woes, she of the loud voice, she who wipes the tears of young boys, wife of an Army Reservist at war.”

Families in this issue re-enact—sometimes heroically, sometimes violently, sometimes in silence—the deepest struggles and decisions we face as humans.  The father in Mark Rapatz’s story, “Bellwether,” after impregnating his daughter, reinvents himself as a father.  The father in  “What It Means To Be a Man,” by Ed Bok Lee forces a murderous act on his son to teach him a lesson.

The questions asked in this work are important, if unanswerable. “Let us keep turning to each other,” Travis Mossotti writes, “like children / pausing for answers to questions that always begin / and end with why.”

What is the nature of love?  How do we come to terms with, construct and reconstruct, our own identities?   The narrator in Ames Hawkins’ “Optickal Allusion” is mesmerized by the novel Jaws, which she reads when she’s in junior high.  Her struggles with her own sexual identity echo her father’s unspoken struggle:

But I also know that it wasn’t Brody, or Hooper, or Quint with whom I identified.  It was the shark itself, the great monster beneath, lurking in the open blue, always on the move . . . . This is what George, my father, and I had in common—the sense that we, too, could be hunted, tracked, and killed.  We were in this wide open together, hidden yet exposed.  He in his marriage and I in my gable.

Some of the questions asked are heartbreaking.  Why do some women conceive and others don’t—why do some give birth to a healthy baby whereas others miscarry? In her poem, “From Five Poems About an Apple Tree,” Sarah Fox asks:  “How does one hold in the mind a form / —which one intended to clutch, feed— / that is said to have existed / inside the body / which evades completion . . . ”

“How did it happen that my hands came to carry words?” Lidia Yuknavitch asks in “The Work of Art,” this year’s Meridel Le Sueur Essay.  She uncovers multiple roots of her avocation as a writer.  One was trauma:  “When my daughter died in the belly world of me, I became a writer—so that all the words that cannot name grief, all the words threatening to erupt from my belly and uterus did not explode up and through my skull and face and shatter the very world and sky.”

Why are some bodies healthy and whole whereas others are riddled with cancer or AIDS, or depend on crutches and urinary catheters to function?  “We come into the world naked, in a puddle of pee,” writes Mary Jane LaVigne in “On Incontinence: Tim’s Coming In and Out Party.”  “We leave shed of all artifice.  In between, we clothe ourselves in personas, some chosen by us, others by fate.”

Even in the womb, our bodies gesture.  Once born, we communicate and mis-communicate, healing and harming, often indiscriminately.  In “Signs of the Times” by Morgan Grayce Willow, Honorable Mention winner of the Judith Kitchen Creative Nonfiction Prize, a group of gang members mistake a deaf man’s signal that he is waiting for a #5 bus for a “dis” against them.  Morgan writes: “Body of words.  Words—and signs—of the body.  Whether hearing or deaf, we all require bodies to make language, bodies which then put us smack in the middle of place and story.  Mistranslation can make of this gift a curse.”

Characters in this issue are in the midst of mythic journeys—from child to adult, male to female, heterosexual (either in actuality or as a default condition) to homosexual or bisexual, civilian to military, single to partnered, birth to death.  The personal and political are juxtaposed and intertwined.  The strong pummel the weak; animals are cared for, eaten, and slaughtered.  Common household objects provide meaning and comfort: the family Sno-Cone maker, the Maytag washer, a lemon, a box of oil paints.

We are caught between worlds; we yearn for wholeness; we commemorate the dead.  In “Orphans in the Terrorist World,” Rigoberto González mourns the death of his mother, a grief thickened by the tragedy of September 11, 2001:  “I descend into solitude for a day, and ascend the next morning somehow refreshed, cleansed of a darkness that first took hold of me when I was twelve years old.  But each year, it comes back, this overwhelming clobbering of my spirit.  And each year, I survive it.”

Our writer’s interview this year is with fiction writer Richard Bausch, author of eleven novels and eight collections of short stories.  In his interview, Bausch talks about his writing, his work as a teacher, the creative process, effective dialogue, characters you can’t forget, the importance of reading, and much more.  He also gives invaluable advice on how to live a writing life: “There’s really only one thing to think about each day: Did I work?”

Our folio of photographs was curated (again!) by MCAD graduate, Ashley Kapaun.  In selecting the photographs, and the cover, for this issue, Ashley wrote the following:

My inspiration revolves around the conflicting methods and circumstances which define identity and the ambiguity of that definition, reflected in our human gestures and exchanges, our secret beliefs and hidden altars, our luminaries.

The photography compares the uncertain moment to the moment of insight and hope, reflecting the continuous shift and expansion of human thought and awareness.

Stan Sanvel Rubin grapples with the making, and non-making, of metaphor in contemporary poetry.  He looks at four new books of poetry—by Stephen Dunn, Carl Phillips, Michael Dickman, and Joni Wallace—focusing on what he calls “declarative poetry: a poetry that by and large abjures metaphor and decoration . . . . a poetry of cunning transparency.”   Making sense out of the cosmos, and our place in it, is the domain of myth.  We create stories to explain.  A preverbial child points to what he doesn’t know and gestures, “What is that?”  When she’s old enough to talk, she asks, incessantly, “Why?”  The earth is round.  “Why?”  Gravity keeps people standing upright.  “Why?”  Finish your cereal.  “Why?”  Grandpa is dying.  “Why?”  This “Why” can drive a parent to distraction.  We writers do it, too.

“If we are going to meditate on the purpose of existence,” writes Eleanor Lerman in “Mysterious Interventions,” “then we might as well start / with Life As We Know It, into which / we were born confused.”  Even if there is no answer, the compulsion to know, Lerman says, “does not diminish.”   So what do we gain by such questions?  An occasional clue perhaps, “The night of a thousand falling starts / The mysterious intervention that /changed what you think of as your life / but may be something else.  And if / so, that is where the real work begins.”

I hope you find your own “occasional clues” on the pages of this new issue of Water~Stone Review.  Where the real work has begun, and is continuing.