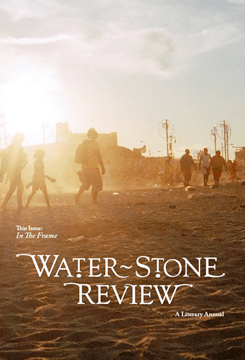 Like the narrator in Tina May Hall’s short story, “For Dear Pearl, Who Drowned,” some of us at one time or another suffer “temporary blindness,” whether it’s from physical or psychic trauma.  For some, this temporary blindness results from coming into a state of ecstasy, or rapture.  Here I’m using the metaphoric, not the physical, meaning of “temporary blindness.”  The good news, unless you’re the ecstatic longing to maintain your vision of the ineffable, is the “temporary” part.  We recover.  Yet how is our vision, our capacity to see, changed?

The young narrator in “For Dear Pearl” stares too long into the sun while in the throes of a personal tragedy.  Her vision is restored through the healing powers of time and the beneficent intervention of a palm reader.  While there will always be something or someone missing in her gaze, she has gained a whole new capacity to see.  “Something fell away or burned, and there you found yourself,” says the speaker in Richard Robbins’ poem, hiding in the dark at the bottom of the well.

This preoccupation with seeing, with proclaiming what we do or do not see, is an age-old subject in literature.  The narrator in David Huddle’s poem, “Passerina Cyanea,” asks: “Why does it / matter so / much to see / two ounces / of hollow / bones, sinew, / flitty wings, / azure feathers?”

“You do see it— / of course you see it” says the speaker in “Eyes Open Eyes Closed.”

This idea of seeing also influenced the selection of In the Frame as title for this year’s collection, taken from Dinah Lenney’s piece of the same name.  A dominant image in Lenney is a poster of a man looking at a poster of a man.  What does the artist, created by the writer, include in the frame?  What does s/he leave out?  What does the artist mean by it?  What does the writer mean by it?  What are we to think?  The ideas generated by these questions—about the nature of meaning, the power of art, the interplay between reality and artifice—ripple throughout the collection.

The authors in this issue ask multiple questions of themselves and us.  “What is it we crave?” Sima Rabinowitz asks.  “Bread, or the idea, the impression, the suggestion, the invention, the image of bread?”  The speaker in the poem, “Night Swim,” asks as she floats, alone, in a river: “am I this or am I that?”  “How much more can you stand?” asks the speaker in Eleanor Lerman’s poem, “Desire Stands Apart.”  “What does I become my mother mean?” asks Marcia Aldrich, author of “The Mother Essay.”

What is the nature of written intimacy, reviewer Stan Sanvel Rubin asks, in an age of e-mail, twitter, blogging, and Facebook?  The poets whose books he reviews blend “private association and public accessibility” in a way that lives up to Matthew Arnold’s challenge “to see life steadily and see it whole.”  Rather than masking or exaggerating emotion, they create “fresh correlates” for it.

The longing for home, or the idealization of it, remains a recurring subject.  Ira Sukrungruang recreates the yearning of his parents for their native Thailand and the paradoxical yearning for America after they do, in fact, return home.  Katie Hae Leo, an adoptee, returns to Korea in search of roots and connections.  Alder Monson explores what it means to write a place, rather than write about a place in his essay, part of which is a response to a reviewer who disagreed with Monson’s depiction of Michigan’s Upper Peninsula in his novel, Other Electricities.   Is one person’s Michigan or Midwest ever another’s?
In this year’s Meridel Le Sueur Essay, “Kestral Avenue,” Cheryl Strayed explores her path from journalist to writer of creative nonfiction as she explores the truth of a transformative experience from her past.

We are happy to publish the winner of this year’s Jane Kenyon Poetry Prize: “Four Corners” by Michelle Bonzcek.  We are also publishing two poems selected for Honorable Mention by this year’s judge, Mark McMorris: Myron Ernst’s “Beyond the Green Line” and Brett Foster’s “Sponge Bath as An Answer to the Problem of Knowledge.”

Making the political into art is a subject explored in both of the writer’s interviews published in this issue.  Novelist and short story writer Ann Pancake talks with urgency and eloquence about the subject of her award-winning novel, Strange as This Weather Has Been: mountaintop removal, a form of strip mining that is destroying landscapes and communities in her home state of West Virginia and elsewhere.  Throughout the interview she discusses not only the craft necessary to transform such a complex, politically charged issue into a successful work of fiction but her goal to move beyond stereotype in creating characters who represent the real people of Appalachia.

The subjects in Martín Espada’s interview include translation—literary and cultural; the poet’s need to write about and thus speak up for the rights of others, whether it be the right to write in one’s own language or the right to affordable housing; the role of sound and music in his poetry; and the extraordinary experience of being a poet in Chile during the centenary of Pablo Neruda’s birth.

We are pleased to include a folio of photographs curated by MCAD student Ryan Hageman.  Ryan was inspired in his selection of photographs by the short story, “A Party,” by Eric Rawson. The protagonist of the story, a young boy, peers through a hedge at a party going on in the yard of the house next door.  His own mother lies dying in the house behind him, and the woman who will become his guardian kneels beside him.  Ryan was struck by the vivid motion of life seen through the hedge, the duality between aspirations and reality in the final line: “By the blue and yellow lantern light I saw shining in Jessica’s eyes a kind of wondrous anticipation, and suddenly felt the future’s cold, dry kiss on my forehead.”   The photos he chose speak to the intersection between our dreams and the reality that life provides.