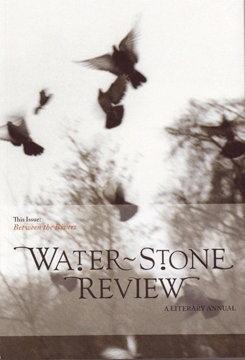 In her review of Patricia Hampl’s recently published memoir, The Florist’s Daughter, Judith Kitchen writes: “In scene after remembered scene, she dramatizes for us the fact that so often the shape of our lives is somehow determined by where—and who—we come from.”  This is a fitting line to take you into our newest issue of Water~Stone Review, many of whose contributors explore the complex ways in which we as individuals and communities are shaped by family, landscape, language, cultural and racial history.

In Anthony Farrington’s short story, “Printer’s Ink,” a father returns home to find his baby girl lying on a blanket of newspaper laid by the mother who has abandoned them both, the type literally imprinted on the child’s skin.  Andrea Hollander Budy, in her lovely lyric essay “Soundings,” draws on her love of words—their myriad meanings and etymologies—as she traces the lessons learned from her mother, an officer’s wife who died at the age of fifty-one.  The military life—war itself—is a powerful legacy: sons of fathers who served in World War II and Vietnam are themselves sent to Iraq and Afghanistan.  In the safety of the family living room these same boys played war games, built model planes and battleships, and watched war movies on T.V.

Andre Perry boldly explores the legacy of language as he takes on culturally and emotionally loaded words like “faggot” and “nigger” in his essay “Language and Other Weapons.”  The same word, “nigger,” spoken with humor and affection between two black men becomes a weapon when it’s used to mark a black man or woman as “different, something less than,” debasing his or her blackness.  Josie Sigler touches on similar territory in her unforgettable story “Deep, Michigan,” whose title character Thomas, otherwise known as “Little Ho,” a nickname he picked up from the ladies, is also called “faggot” by his circle of friends, a name he acquired after being assaulted in the shower when he was in juvenile detention and then again by a gang of older boys.  Partly to show he’s not gay, Thomas enlists in the Marines and is shipped to Iraq where, even on the battlefield, the stigma from his past follows him.

We’ve taken the title for this issue from Alamgir Hashmi’s beautiful poem, “Between the Rivers,” which captures the real and metaphoric rivers that shape and divide us—humans, nonhumans, cultures, classes, races, families, generations, countries.  Many of us reside or spend time in the spaces “between,” whether these spaces be physical—the sometimes peaceful, often dangerous zone between competing countries or armies; cultural—immigrants and children of immigrants crossing and living between cultures; or intellectual—writers and scholars staking their claims between disciplines or theoretical frameworks.
This year’s Meridel Le Sueur Essay, “Lazarus,” was written by Susanne Antonetta, one of the visiting writers interviewed in this issue.  Focusing on the plight of trumpeter swans, the essay sounds a not-familiar-enough alarm about the global legacy we have all inherited: “Considered extinct and now back again, though still imperiled, the swans have a magic for us, who live in fellowship with those who rise and fall from the species dead: the salmon we doggedly breed in little jars, then slip into the water; the whales who pass by twice a year; sea lions; pods of orcas; golden eagles; all endangered, beings who seem to live with one fin or claw in the next world.”

We are happy to publish the winner of this year’s Brenda Ueland Prose Prize, judged by Robin Hemley: “After Action Report,” a work of creative nonfiction by Will Jennings, a writer from Iowa.  We are publishing as well the piece of creative nonfiction that received an Honorable Mention, “Hendrix in Fallujah” by Mike Rollin, a Minneapolis writer.

Our first writer’s interview is with Susanne Antonetta, author of four collections of poetry (under the name Suzanne Paola) and two award-winning books of creative nonfiction: A Mind Apart: Travels in a Neurodiverse World and Body Toxic: An Environmental Memoir.  Our second interview is with Carol Muske-Dukes, who has written four novels, her most recent being Channeling Mark Twain, several collections of essays, and seven poetry collections, including Sparrow, finalist for a National Book Award.

We are adding a new feature entitled The Recycle Bin written by Robin Hemley.   Like our well-read The Bookworm, whose mission is to introduce or re-introduce us to valuable “old” books (of course, through the lens of The Bookworm’s wonderfully rich and quirky mind), Robin Hemley reviews early issues of literary magazines, some still in print, others not.  In this issue of Water~Stone Review, he reviews a 1956 issue of Accent magazine, in which appeared a lively interview with William Faulkner and the first story ever published by Grace Paley.

Once more we are including a folio of photographs curated by MCAD student Jenny Tondera.  In selecting the photographs for this essay, Jenny was inspired by the title (“Between the Rivers”) and content of the issue, in particular, the quiet and often contemplative limbo she found in the lives of the individuals written about, and the imprint each of them left on the lives and places around them.  Whether or not people are actually visible in the photographs, their presence is alive in the details.

I am mindful of the lessons offered by the gifted writers in this issue.  Lessons about the beauty and pain of language, the long arm of war, the immigrant’s complicated journey.  Sometimes salvation is all about luck, as it is for the fish stranded in the shallows in our final poem, Mark Chapman’s “Absolved,” freed, finally, when the tide comes in.  Sometimes it’s in the search for what is true, or necessary—“the icons we need to right our lives”—from “Ancestral” by Trent Busch.  Sometimes it’s simply in what we know, as Susan Steger Welsh’s “Seamstress” tells us: “I know how to set in a sleeve so smoothly you’ll never notice it’s been done, all the ease molded to the curve of your arm, its desire to be free in all directions, like a girl swinging a jump rope.”  When all else fails, and you’re as lost as the narrator in Joyce Sutphen’s poem “Start With This,” there’s always the hope that “something better is on the horizon.”

I hope you’ll find this to be true in reading our new issue of Water~Stone Review.